What are you looking for?


Celebrate and honor African American heritage during Black History Month in February. From performances to history lessons to tours, there are plenty of exciting events and activities planned throughout Prince George's County.

The year 2020 marks the 100th anniversary of the passage of the 19th Amendment, which guarantees and protects the right of women to vote. In honor of this historical milestone, the Annual Black History Month Exhibition looks at the history of black women in the fight for suffrage and beyond. From black women leaders in the antebellum suffrage movement to the election of the first black woman as County Executive in Prince George’s County, this exhibit explores the multiple ways that black women have engaged in electoral politics before and after gaining the right to vote. Looking at both the local and national levels, this exhibit uncovers and celebrates the myriad roles black women have played in the arena of politics from organizers and strategists to party leaders and office holders, all in spite of societal limitations placed upon them due to their gender and race. 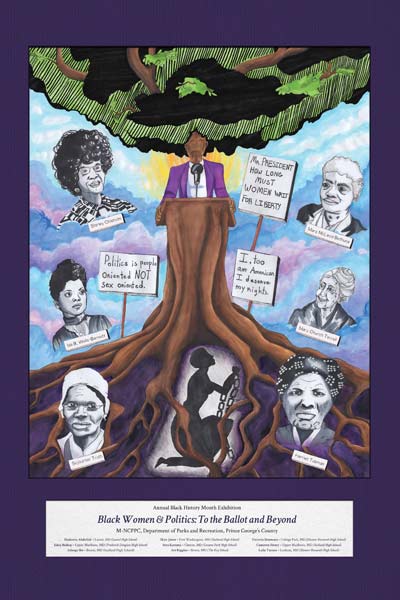 This exhibit is curated by the M-NCPPC Black History Program.

Get Notified
Interested in keeping up with our programs and events? Please send us your contact information by calling 240-264-3415 or emailing the Black History group at Parks and Recreation.