What are you looking for?

A. Shuanise Washington was appointed to the Prince George's County Planning Board in 2011 and reappointed in 2012 and 2016.


Ms. Washington is the President and Chief Executive Officer of the Congressional Black Caucus Foundation, Incorporated. (CBCF). Prior to her appointment as CBCF President, she was the Founder and Principal of Washington Solutions, LLC which provided strategic counsel to businesses, governments and non-profit organizations. 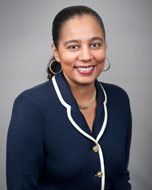 
A. Shuanise Washington holds a bachelor's degree from the University of South Carolina and a cognate in mathematics.